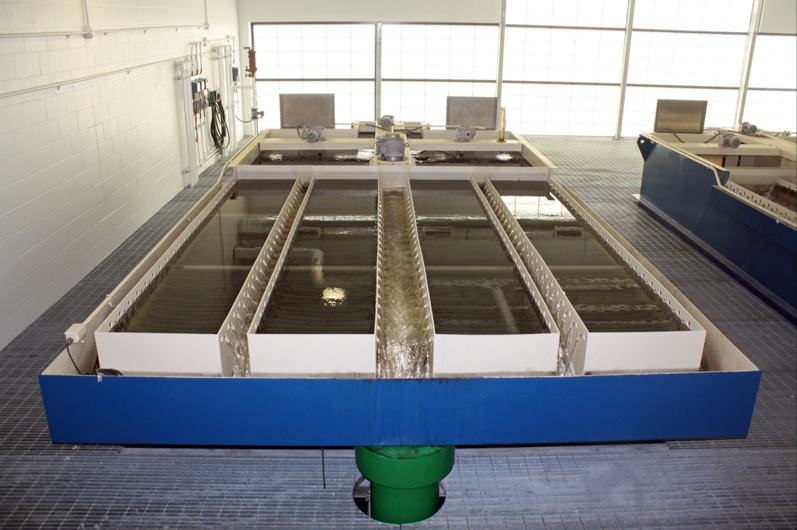 Situation:
In 1998 the city of Brooklyn Park Minnesota expanded its water treatment plant to a capacity of 20 MGD. After 12 years of operation the mineral levels and water quality in their wells had changed and they were only able to consistently produce 16-17 MGD. In 2008, the city hired SEH Inc. and began an optimization and capacity upgrade project to bring the plant up to a peak flow of 26 MGD to meet the cities current and future needs.

Solution:
The cities solution to the capacity issue was the addition of two new clarifiers to handle 5.5MGD each and a 9 MGD filter expansion. The water optimization upgrade included the addition of HEI plate settlers to reclaim the water from filter backwashes and clarifier wasting. The HEI plate settler process allowed the city to reclaim up to 98% of these streams with the additional benefit of a residuals management step. This step utilized the plate settler’s internal mechanical thickener to further the consolidation of their Iron and Manganese solids as well as capture any filter media lost during the filter backwash cycle. As a result, the city’s sewer maintenance and discharge costs were reduced.

System Description:
The HEI plate settler system was installed in a new building addition. There were three HEI plate settlers, each capable of 1000 gpm. The plate settler process was designed with the flexibility of operating a single or multiple units as demand required. The HEI plate settlers have unitized tank construction, which cuts down on the footprint and building size by 25% over other competitive units. Each HEI plate settler has an isolated mixing and flocculation chamber with VFD motor control to optimize any chemical addition. The process uses PD pumps for sludge removal and solids recirculation. Each unit is equipped with effluent turbidity measurement and all facets of operation are scada monitored and controlled.